1.The best thing about working locally is that you get under the skin of your subject. You’re not just scraping the surface and making predictable, stereotypical images.. Spending years with the same location opens up depths and dimensions that many people overlook.

2. I love history, especially art history. By taking on strategies in art practice, I can make references to different times and places. Taking photography out of the everyday and into a different context makes the viewer think about contemporary life in a more dynamic and diverse way.

3. By putting a squatter into a Vermeer pose [see image below], the current situation is given an historical context, which can lift the status of the squatter and make their plight become universal rather than just a tabloid headline.

4. There has always been this tension in photography; it’s one of its inherent qualities.

5. Photography is a lie, as soon as a photographer takes out his camera the situation changes but everyone believes in the truth of the photograph. When I create images I try to make the viewer realise the image is a construction by using devices like historical postures.

6. It’s the same way Brecht makes you aware of the stage while at the same time suspending your notions of disbelief in his plays. So in my photographs you are taken to a real place, but then this notion is turned on its head when you learn its reference. That’s an exciting tension.

7. Very little really – I’m a dinosaur, I still shoot on large format sheet film with a huge camera. I don’t believe digital is as good at producing 5ft x 4ft photographs. It’s great for magazines and the internet but large scale photographic prints in a gallery, shot on large format film, still give the wow factor. My friends in the film industry still say 35mm film is still the best for lighting and mood, and digital is struggling behind.

8. As for developing projects, that’s still the same: work all the time, shoot all the time, things develop and breakthroughs are made out of mistakes and perseverance.

9. Don’t give up, keep working, believe in what you’re doing and stay focused – you’re in it for the long haul.

Tom has earned several awards during his career, most recently an Honorary Fellowship from the University College Falmouth (2012). He has an Honorary Doctorate of the Arts from the University of East London (2011) for his work documenting the lives of the people of East London. He was awarded Honorary Fellowship of the Royal Photographic Society in 2010. He is a Professor of Photography Research at the London College of Communication, University of the Arts London.

Tom graduated from the London College of Printing in 1994 with his work ‘The Ghetto’, which is now on permanent display at the Museum of London. He studied for his MA at the Royal College of Art, where, in 1996, he was awarded the Photography Prize by Fuji Film for his series ‘Travellers’. In 1998 ‘Woman Reading a Possession Order’ from his series ‘Persons Unknown’, won the John Kobal Photographic Portrait Award at the National Portrait Gallery. In 1999 Tom’s series of the ‘Holly Street’ estate was exhibited at the Saatchi Gallery, London. In 2000 Tom’s ‘Life and Death in Hackney’ series, went on show at the White Cube Gallery, then on to Manchester City Art Gallery.

In 2006 Tom became the only artist to have a solo photography show at the National Gallery for his series ‘Living in Hell and Other Stories’, which talked about Hackney and its relationship to its local paper. One work was acquired for their collection and is now on permanent display. Tom has recently been commissioned by the Serpentine Gallery London, The Victoria and Albert Museum, the Museum of London and The Royal Shakespeare company all exhibiting new works, both in film and photography. His works are in many collections around the world including; MOMA, New York, The V&A, London, Moderna Museet, Stockholm, Smithsonian, Washington and the Los Angles County Museum of Art.

Tom lives in East London and his work is often particular, but not exclusive, to his community and neighbourhood. 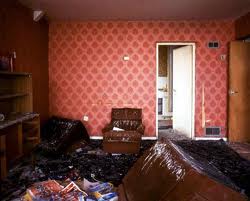 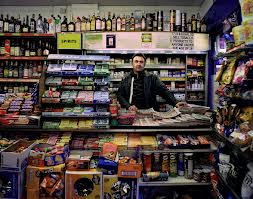